Lecture within the WZB series "Achtung: Demokratie" by John Keane

There are many signs that we have entered a ‘post-truth’ era defined by the burial of ‘objective facts’ thanks to a public avalanche of ‘appeals to emotion and personal belief’, as the Oxford English Dictionary states. Critics of this ‘post-truth’ trend like to stress the political dangers of growing government secrecy, the lies of politicians, corporate bullshit, media silence, and populists’ talk of ‘fake news’. They call for a recovery of ‘truth’ in public life.

Professor John Keane will discuss the current situation. He asks how credible the appeal by journalists and others to recapture ‘truth’ in our public lives is. What exactly is truth? Why is it important? Or is it less important than we imagine? Does truth-telling have its limits? Might ‘truth’ be fading from our lives, and might bidding farewell to truth be a good thing? Additionally John Keane will screen video clips to illustrate the main symptoms of the post-truth trend.

His lecture will be combined with a presentation of ‘fake news’ and facts by Silvia Höhne, staff member of the WZB Research Information unit.

The introduction will be held by Ellen von den Driesch and Fred Felix Zaumseil, the initiators of the series Achtung: Demokratie.

John Keane is Professor of Politics at the University of Sydney and at the WZB and Distinguished Professor at Beijing University. His publications include The Life and Death of Democracy (2009), Democracy and Media Decadence (Cambridge, 2013) and When Trees Fall, Monkeys Scatter: Rethinking Democracy in China (2017).

The event will be held in English with no translation into German.

The WZB series Achtung: Demokratie was initiated by staff members of the WZB. The series offers a platform for discussions that have been lead since the rise of populism, the Brexit referendum and the election of Donald Trump. Liberal democracies are under pressure and have to face criticism. And science has to clarify, in how far it engages in these discussions beyond dry analysis. 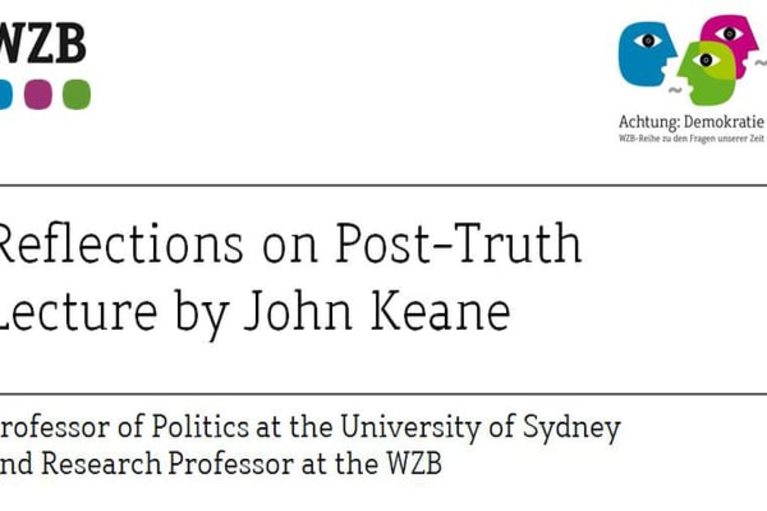 John Keane at the WZB

WZB offers child care during the event. If you are interested please send an e-mail to Friederike Theilen-Kosch: friederike.theilen-kosch [at] wzb.eu until January 3, 2018.